What is the backbone of your company’s culture?

A recent survey by Gallup reveals that approximately 70% of the American workforce feels disengaged at work. Which, in short, means the majority of the American workforce is miserable from 9am-5pm. According to a survey completed by Eagle Hill Consulting, when asked if they know their company’s core values, most employees did not, which only adds to their disengagement.

“When employees say they don’t know their organization’s values, that’s a warning signal that an organization can’t effectively execute on its business strategies, has a workforce morale issue, or is vulnerable to ethical lapses,” says Melissa Jezior, Eagle Hill president and chief executive officer. 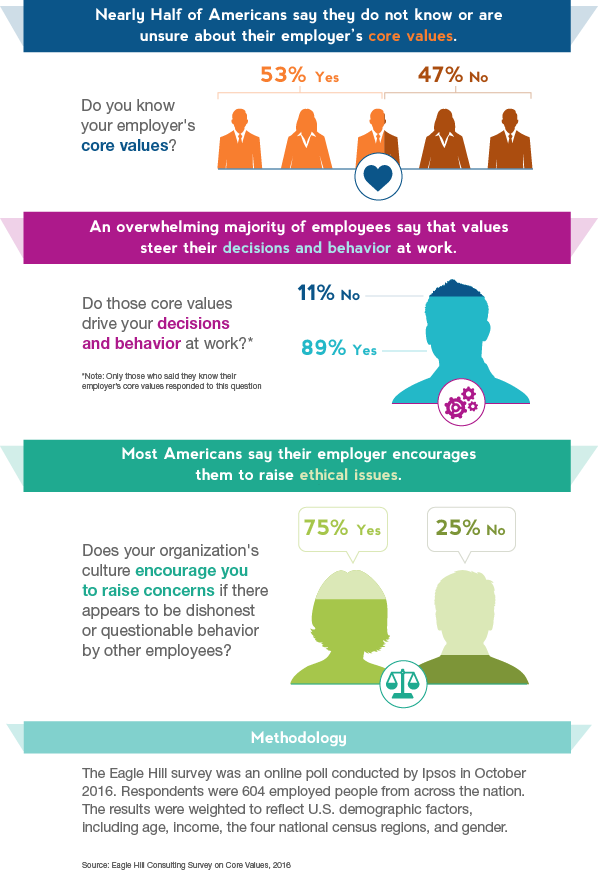 An engaged employee is more likely to have confidence in their ability to make decisions in the workplace on a daily basis, especially those that clearly align with their company’s values. These workers are more dedicated to their place within the workplace as well as their success and the company’s.

“When there is a values breakdown, the culture simply becomes what is tolerated among managers and employees. At best, the organization isn’t as effective as it can be. At worst, we see ethical lapses that become a crisis,” Jezior also went on to explain how troubling these findings can be, since values are intended to be the driving force behind an employee’s day-to-day motivation.

The study was conducted after the influx of workplace scandals that seemed to stem from a lack of core values. For example, Wells Fargo & Co has been accused of having 5,300 employees engaging in fraudulent behavior and opening accounts under customer’s names without their knowledge. During the same study, it was found that 89% of those employees who are aware of their company values use those same values to steer their decisions and behavior at work. If those 5,300 Wells Fargo employees had been aware of their company values, it’s possible the fraudulent behavior could have been avoided.